Progress on SEI, and a really good evening out

I've been working away in the shop, fitting the seat tops and filleting them, turning the offcuts into doublers under the edges and sanding out the odd dribbles of epoxy,  read on.

Its getting close,  today I fitted the forward seat top.   Tis is in two pieces joined down the middle and glued in to form  to form not only the seat but the top of the forward bouyancy tank, as well as bracing the mast box. 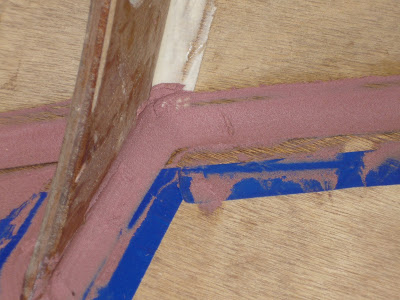 So that’s done, yesterday I fitted the doublers under the edges of the center thwart and the after seat ( which should be referred to as “Stern sheets” but I’m not that “correct” in my terminology).  These doublers make a big difference to the feel of the boat, stiffening the overhanging edges of the seats considerably as well as giving them a much more “solid” appearance.
These adoublers re made from the scrap left over from cutting the big parts, there wont be much more than kindling left when I’m done with this project,  successively smaller parts get cut as the project goes on,  so the scraps get smaller each time around. 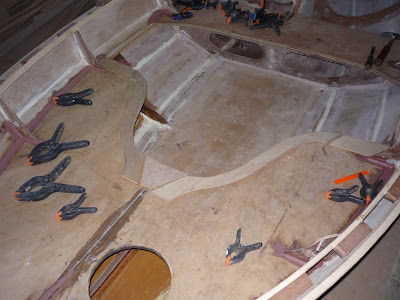 Stern sheets, the doublers sitting on the seat  above where they will be fitted underneath the overhanging plywood seat edge. 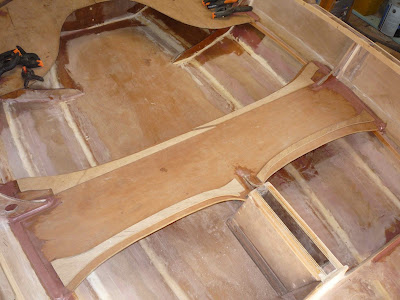 Center thwart.  This is a great way to use the offcuts from the planking, makes a much nicer job of the edges of the seat. Next job to do is to glue them in, then round them off.
Forward seat tops to come next.

So tomorrow its at them with the angle grinder and sander to finish off the endges, round them over and fair them.  Then some filleting, more sanding,  and then its time for paint.
I must say that the Fein Multimaster is an amazing tool for sanding fillets, the point of that triangular sanding head with 60 grit paper on it does a very good job, effortlessly and quickly.  I love this tool and would almost own it just for that.

Paint, the outside looks good,  two coats of primer, and two coats of  satin finish paint looks good, so tomorrow I’ll be splitting the white between two containers and pouring a little of the dark green into one to get the pale green for the interior and then start swinging that paintbrush again.

Tonight, my friend and next door neighbour Emily Scott sings.  She has won a scholarship to the UCLA School of Music where she will study in the Masters classical voice program,  this is seriously top level stuff!  I’ve been to a couple of performances and she’s got me converted to Opera.
Tonights performance is a fundraiser, she’s got to get enough money together to live in Los Angeles for two years to take up her scholarship, and I’m going along.

We’ve had shared dinners, helped each other out some, and enjoyed each others company.  I’ll miss her, all the very best Emily.

Time I got myself tidy, don’t need the black suit and tie but epoxy and paint covered overalls wont quite cut it.

( I went, full house, I listened, I enjoyed the concert immensely)

Posted by John Welsford at 1:36 PM