Comfort, and I think I’ve said this before, can be a whole lot of small things that add up to an elimination of all the annoying things that just don’t fit.

Kairos helm seat is quite high, it leaves the legs dangling about a foot ( or two feet  if I were being funny about it)  above the cabin sole, so for the most part a voyage is spent standing up with one hand on the wheel and one on the dashboard.
Lower the seat? I thought about that, very briefly, when its down a bit its not possible to see over the bow when sitting so thats out.
Standing  there is tiring after a while, the little plastic kitchen stool that I plucked out of the river on one of my rubbish collection rows isn’t high enough to make an effective footrest, and I got annoyed enough the other day to do something about it.
I’d been annoyed about this before, but sometimes the circumstances have to align in order that things can happen.
So, I had offcuts of heavy plywood from another job, a rainy day on which that I couldn’t do the job I had planned for that day, and some test running of “Old Henry” the big Ford diesel which meant sitting at the controls for a while.

Got started. Made a cardboard and hot glue mockup, tested for height and angle, and fit. The shape there is a combination of  a slight slope of the bulkhead forward of the footrest box, a curve in the side of the cabin plus it slopes down from forward to aft, yet another angle where it meets the front of the side seats, and the cabin sole has a very slight slope in still another direction .
House builders have it easy, almost everything is straight and square.

So, I’ve built it. It has a removable top, and yes its secure so wont slide around, and the “box” will be used as a home for emergency signal flares and the first aid kit.  I’ve got a coat of varnish on it now, ( not shown in the pics), have a piece of carpet cut to fit the little space behind it and am about to put a patch of non skid on the top to finish it off.

Another small improvement. Tick that box! 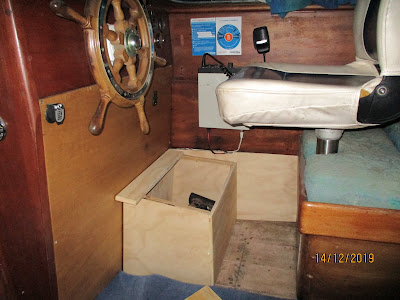 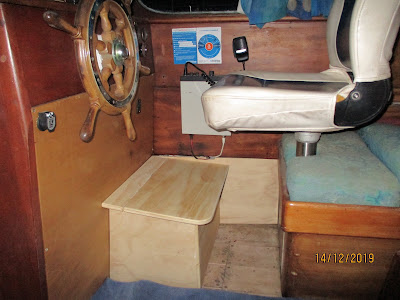