The heat was on there for a while. Too much of it in the wrong place.


Its been far too long since the last time I had Kairos out of the water for a scrub and antifouling, so she had quite the oyster and barnacle farm under there.  The silt laden and often brackish water here in the upper reaches of the estuary seem to encourage them.
I’d noted that Henry the Ford diesel was smelling a bit hot, so had searched out a new sensor and gauge,and when Steff the amiable and helpful 12 volt wizard from North Harbour Auto, air and electrical  (highly recommended, we get our cars serviced there as well as the sparky stuff done  http://auto-sparky.co.nz/  ) was here looking at some problems the original wiring in this old ship was causing, he fitted those so I’d know just how hot Henry was getting under the cabin floor there.

It was time I scrubbed the bottom, we’re expecting to go cruising this summer, Denny and I, events have overtaken our budget so we’re staying around home.  But a week or so away on the boat is a pretty good substitute so I figured that I’d best be ready.

Off down the river to the scrubbing grid, and Henry wasn’t happy, no piddle out of the water circulation indicator.  I thought that the growth on the bottom was such that the water inlet was blocked, so shut the engine down and drifted with the tide and wind helping me, only starting the engine when I needed to thread my way through the moorings.

I was quite proud of the way I maneuvered Kairos, all 43 ft and near 15 tons of her into the cramped space on the grid, tide and wind pushing her around,  got it first try, got a couple of lines around the piles and shut a boiling Henry off again.

Over the next two tides ( one was around midnight ) I got the bottom scraped off pretty clean, and removed the barnacles from the bronze prop and rudder, those would be the reason she was hard to steer, and did a very careful job of cleaning the through hull fittings.
I even pulled the ball valve and associated hosing off the inside of the engine water inlet to check that no bivalve had taken up residence in there. All clear.
I even checked the manual to see if the cooling pump needed priming. ( no)

There were other jobs to do, I repositioned all three bilge pumps, having replaced two quite recently, got their switches working properly, cleaned out the empty hose from the head holding tank which had a variety of shellfish living therein, ( didn’t save those for a snack) and a few other things.

But when it came time to head on out, at about an hour before high tide, remembering that once the tide fell a little I’d be there for another tide. I fired Henry up, and checked.  Still no piddle.  I thought of the  words on the cover of the Hitch hikers guide to the Universe, and said to myself, “Don’t panic”.

Tore the floorboards up, checked all the water lines, all ok, the only thing left was the water pump.  Now, while I know how they work in theory, and had watched a YouTube video on replacing the impeller in a pump like this, I’d never done it before.
Kairos had two spare impellers in her spares locker plus a complete new pump.  Try the easy option first, out with the toolkit, down in the engine bay, very hot down there, grab the spotlight so I could see, hotter still.  Did the contortionist thing that any work on that engine seems to require, and pulled the back plate off the pump.
A mass of mangled rubber fell out.  That might have been an impeller sometime, but not any more.

With the tide now falling, I think I set a world record for a first timer fitting a new impeller to one of these pumps, got more than a few bruises from leaning on the sharp bits on the engine, and was getting a bit faint from the heat when I came up to turn the key to see if that worked.
It took a couple of minutes, but then the water stream was clear and steady.  Phew!
Drank a mugful of water to ward off dehydration, cast off and headed out, leaving the bow line on so the fast running incoming tide could swing the ship to face the way out, let that line go and away.

It takes a bit over half an hour to get upstream to my berth, and it was great to have Kairos handling well again, responsive, quieter, and the temperature gauge was sitting on about 50C, coolish, but a lot better than 120C and pushing steam out the pressure cap.

Several jobs well done.  She’s coming out of the water for a full paint job, probably in March sometime. Scrape the hull bare, new paint from the wood out, the stuff that’s there is 49 years old and although its had paint over it, its flaking off in places so its time for a major.

In the meantime, Henry is a lot happier. 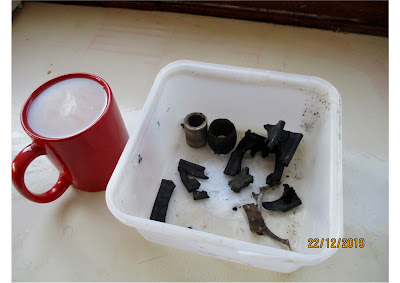 The remains of the 3inch diameter Jabsco engine cooling pump impeller.  And a mug of tea. very welcome that mug of tea was.
Posted by John Welsford at 10:58 PM