Report from the far south. 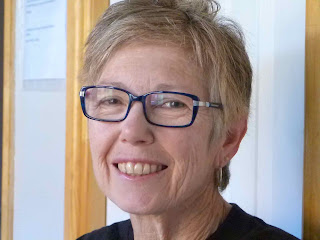 I miss that big smile already.
8 Am Wednesday 28th.

Christmas dinner here in Chile is celebrated on Christmas eve, and we’d not thought about it much, but there are odd coincidences happen here. Author Terry Pratchet said “Million to one chances happen nine times out of ten” and in magical lands such as this, that has been happening to us.
We found a pizza restaurant, were sitting at one of the long bench tables watching an enchanting encounter between twin Dutch boys, about 7 or 8 years old, and a slightly younger Chilean girl.They played together as though they had known each other forever, and the girls mum, sitting next to us shared some of her pizza with Sophie, the two chatting away happily.
At the end of the meal Mama mentioned to us that she was the owner of a restaurant about three doors away and that they were putting on a special menu for Christmas dinner, and we might consider having our celebration there.
We did, five courses, all very different to our usual fare, and amazing.  Wonderful, recommended.  Broccolinos, if you get this far south, recommended! 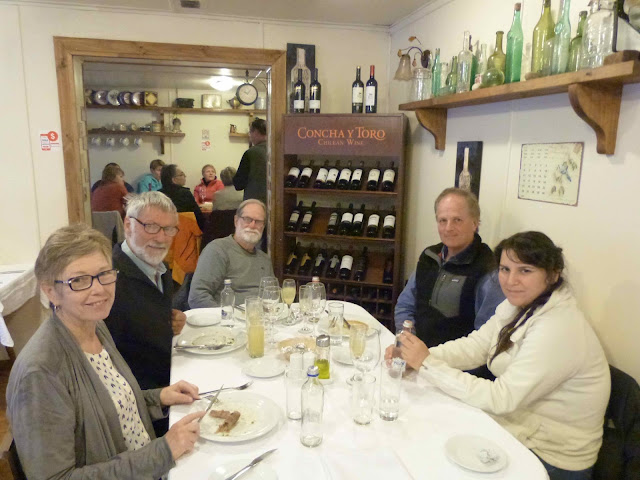 From left to right, Denny, me, David Nichols our film maker, Howard, one of the few shots we've got of him without his hat on, and Sophie our helper and translator at Broccolinos, where the chef does his best "grumpy chef" impersonation. He told us that he's "practicing his cooking". It was a superb meal.

A couple of days ago Denny and Sophia took the day off and went off on a tour of the “penguino” colony on Magdalena Island out in the straights, the walkways are roped to keep the sightseeers from disturbing the birds too much but the penguins seem totally unfazed by the people walking along.  Some have made nesting burrows right on the edge of the path, and at this time of the year had fluffy chicks almost as big as their mums and dads.  Our ladies were amazed and intrigued,  that’s a trip that’s well worth the effort and modest cost.

It was a busy day yesterday though, some of the team were delivered to the airport for the beginning of their long journey home , that was Denny and Dave on the morning trip, and Sophia heading back to family in Santiago on the evening run. We’re missing Dennys big smile and laughter, Daves quiet presence with the video camera, and Sophia translating when we have to negotiate in Spanish.
Adios amigos for now.

In between the two trips Howard and I got the replacement mizzen mast glued up using the floor of the crate as a workbench, we’ll have access to the crate again at 9 this morning and will be loading the glued up hollow spar along the side of the car ( rental cars can do anything!)  and heading off to the Nao Victoria museum where the Magellan ship and the Beagle replicas are. There is a small workshop there where, in the shadow of the two big historical ship replicas we can make as much noise and mess with the power plane as we need to. 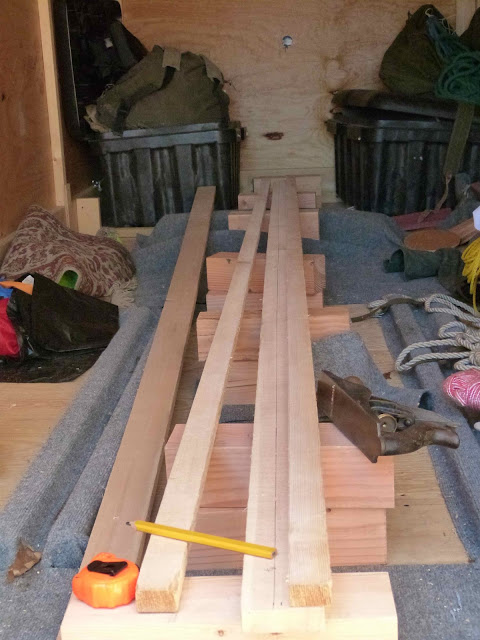 Setting up in the shipping crate to glue the hollow box spar up, we managed to hire a skilsaw and will get a power plane today, the box spar was the best option with the tools and materials that we had and it has been assembled with aluminium foil in the hollow centre to act as a radar reflector.

I’d expect that we’ll have the shaped and sanded blank back here later today, it shouldn’t take long to get the last few bits glued on and ( fingers crossed that there aren't any distractions) we’ll be putting the first coat of varnish on tomorrow am.

Am and pm are taking a little getting used to here,  there is maybe 3 ½ hours between the two, it never does get properly dark  here at this time of year, its tempting to stay up late as its broad daylight at 10 pm, and the sun is way up in the sky by 5 am so its hard to get enough sleep.
The little unit we are occupying now is better in that respect as we’ve bedrooms that don’t have big windows letting the early dawn in to disturb us.

“Southern Cross” sits happily in the breezeway between the units here, dreaming of the sea so close.  I’m sure she can smell it we can see the Straights from the gate into where she sits.
There is not a lot to do, a tiny bit of paint where the hatch covers had to be relieved to allow for the thicker gasket material ( thanks Keith Nasman for that, very much appreciated), there are some holes to fill where there have been some fittings moved, then its close to time to load. 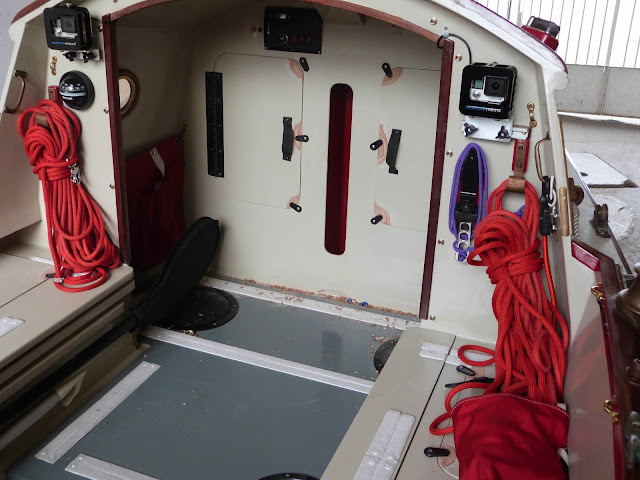 Carving and sanding those reliefs under the hatch closure buttons was a fairly precise job, and as these two hatches swing on carbon fibre hinges that are well fastened I had to fold myself up pretty tight to get in there to do the job. Still, it got done and they just need a lick of paint and they're all ready for use.
Note the "GoPro" cameras, there are two more on board which will be used either by hand or from a moveable mount.  Don't forget to support the movie, we've lots of good stuff on video so far and the best is yet to come.

It's been interesting watching the weather out there at sea, I’d guess that so far one day in five was a day on which it would be possible to sail all day, two more when its ok to sail early in the morning and late in the evening and two days when days when hiding in a sheltered spot and reading a book would be the best alternative.
Two days ago the water was smoking, spray driven by 60 knots or so of wind covering the waters surface as far as we could see!  That qualified as a "read a book day"!
Sailing at night would be a real possibility too, with such long evenings, and some light even at midnight making miles while the wind is down would be a good bet.

I’m about to have breakfast, and damn, I got two mugs out for the morning cup of tea but Dennys in Santiago, will be on the 13 ½ hour flight to Auckland this evening.  Ah well, a second cup wont hurt. 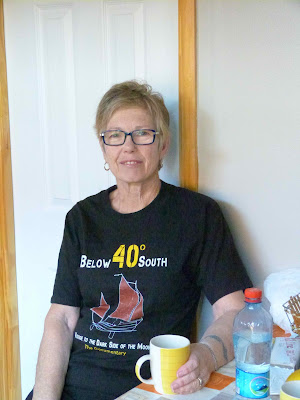 Posted by John Welsford at 3:55 AM