We’ve been in Punta Arenas for a few days now, got quite a lot of things organised but the boats not here yet, so the film team, that’s the five of us, took the ferry to Porvenir across the other side of Estrecho de Magellan, that fabled passage from the Pacific to the Atlantic. Its dangerous for sailing vessels, and in places even powered ships should proceed with caution.
The crossing it in the 2000 ton ferry was smooth, fast and efficient, I’d guess that it runs at around 18 knots and leaves very little wake, and as it came into Porvenir the helmsman followed the narrow channel up to the harbour and flicked this massive lump of a ship around a very tight 90 deg corner at a speed that would have towed a whole team of waterskiers.
Impressive. 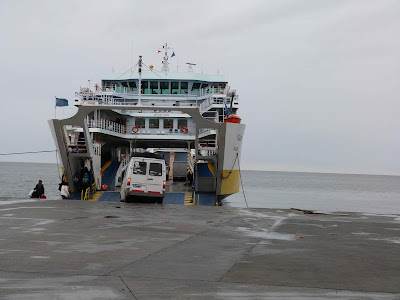 The ferry, I was told that its about 2000 tons, carries 45 cars and 8 heavy trucks, 250 passengers plus some assorted freight. With time spent picking up the stern anchor and laying it again at the other end so they can hold the vessel straight on the ramp its about two hours from boarding to walking off at the other end. 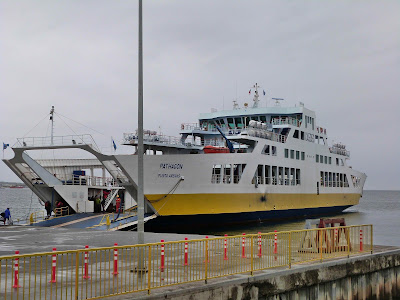 There is a little boatyard next to the ferry dock, which is just a very wide and gently sloping concrete boatramp, the ships landing barge type ramp being lowered onto the sloping concrete to allow cars and trucks to drive on and off.
That boatyard is about as simple as it  gets, I suspect that there is a big tractor somewhere and the fishing craft are simply dragged up the beach onto the flat, jacked up and put on blocks.
The fishing boats are simple carvel built wooden boats, rough, powered in the main by converted truck engines, and for the most part are under 40 ft, some as small as 25 ft. They’re an interesting shape from a designers point of view with very fine entry, widely flared bows and a very flat run with the transom having little or no deadrise.
I’d say that they’ve evolved to cope with the short steep chop that is kicked up by strong winds here, that shape wont pitch much but I think some of the bigger ones would roll a lot.

The town is perhaps 2000 people, biting cold today, bleak, all of the buildings somewhat small, close together and inward looking, there is a surprising number of burned out shells of houses and warehouses in the town, perhaps a comment on old fashioned heating methods, and it overlooks a shallow harbour with a very narrow entrance.

It does have a charm of its own, in part because its  very different from anywhere else any of us have ever been, some of the views are stunning, and the buildings are very different. 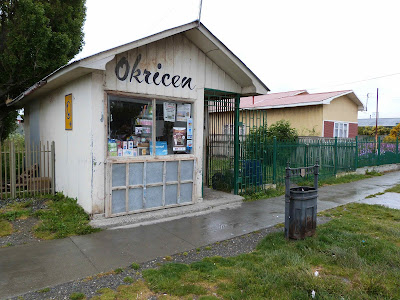 A little corner shop in Porvenir, its about 12 ft square, seems to have one of every item ever seen in a corner shop. This is a land of contrasts, so many tiny businesses alongside a large and immaculately maintained military base, a very modern ferry terminal alongside a boatyard full of battered little wooden fishing boats, a modern Mercedes bus alongside the most beaten up Datsun pickup I've ever seen.  Interesting place.

Our first stop was the museum, where we learned a lot about the Yaghan and Ona people, the indigenous peoples, now extinct .https://www.culturalsurvival.org/publications/cultural-survival-quarterly/yahgan-ona-road-extinction
We also learned a lot of the history of the gold mining and farming industries that flourished here from around 1870 until the gold ran out in the early 1900s and the farming proved largely uneconomic, although there are still a lot of free range cattle farmed.

Currently the main income earner for the area is tourism, and a less fancy tourist destination you’d be very hard put to find, but the bus service ( phone him up and he comes to your house, toots his horn and picks you up, same in reverse with the return,  great service) which runs back and forth to the ferry about 8 km away is great.

We only had a couple of hours as today there was only the one ferry trip out and back, so we checked out the museum, went to a tiny little restaurant and had “a meal that couldn’t be beat” and I’m not kidding.  Simple fare, lots of it, tasty, warming and cheap.  In terms of value for money and simple satisfaction it was great.  Gnocchi, Casseroled chicken, a cold Chicken and corn dish, pork, beef and mashed potato.  Point to what you wanted and a dish FULL was handed to you.
That was the choice but it met with universal approval.

So it was back on the bus, a quick tour around town picking up locals heading for the ferry and a few minutes around the boatyard with the cameras for David and I then a seat in the warm passenger lounge for a little under 2 hours and we were heading “home” to our casa. 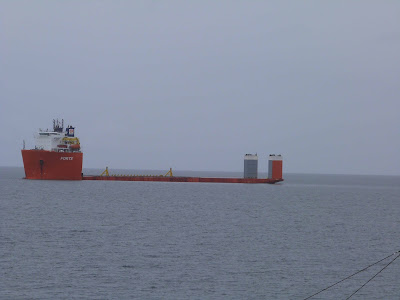 A Ship shipping ship, when we first saw it it was shipping a ship which itself had ships on board. ( I could go on but I wont) It sinks down, floats the cargo onto the deck, pumps the tanks and lifts up, sails away and unloads the same way.
It had an oil rig construction ship on board, which I think is going to be used to help in building a big wharf for a port extension. 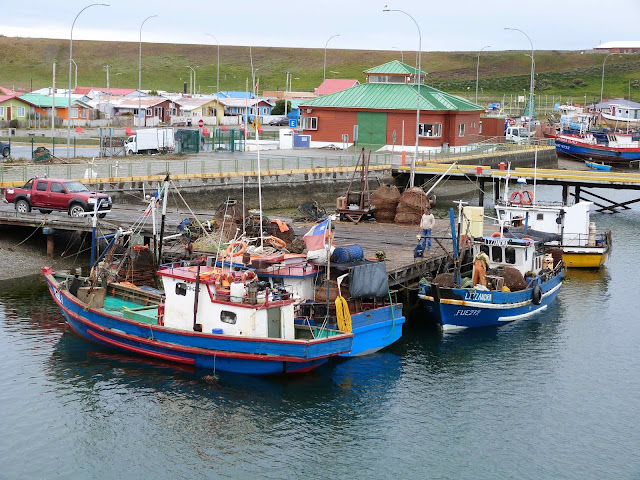 View from the ferry as we came in, those little fishing boats are mainly hunting crabs, its the down season right now as the crabs are breeding. I've seen some of those crabs, and I'd hate to have them hunting me, they're BIGF. Around 20 inches across their legs and 6 or 8inches across the body.
The boats are interesting, wooden, rough, effective, ranging from about 25 ft up to 40 ft. There are giant stern trawlers out there as well, they catch the fish in deeper waters and I did get some pics of a couple of them up on the hard being maintained, 200 plus feet long, big deep vessels that do most of their fishing out in the Pacific. 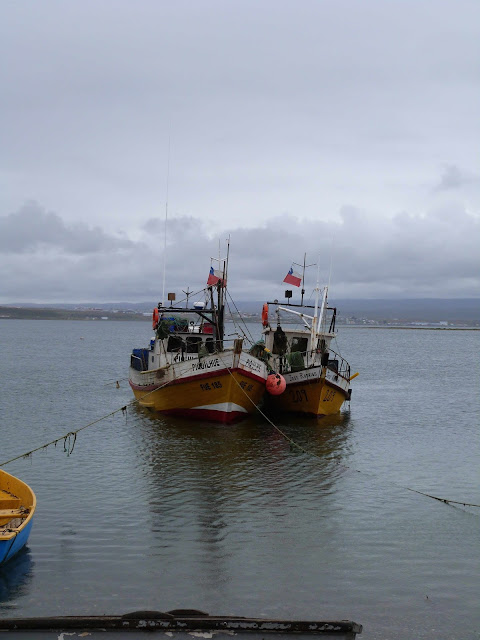 Good trip. Its an interesting place.

By the way some of these photos pan, I've made them large so you can pick up the detail but they need to be grabbed with the cursor and panned from side to side. 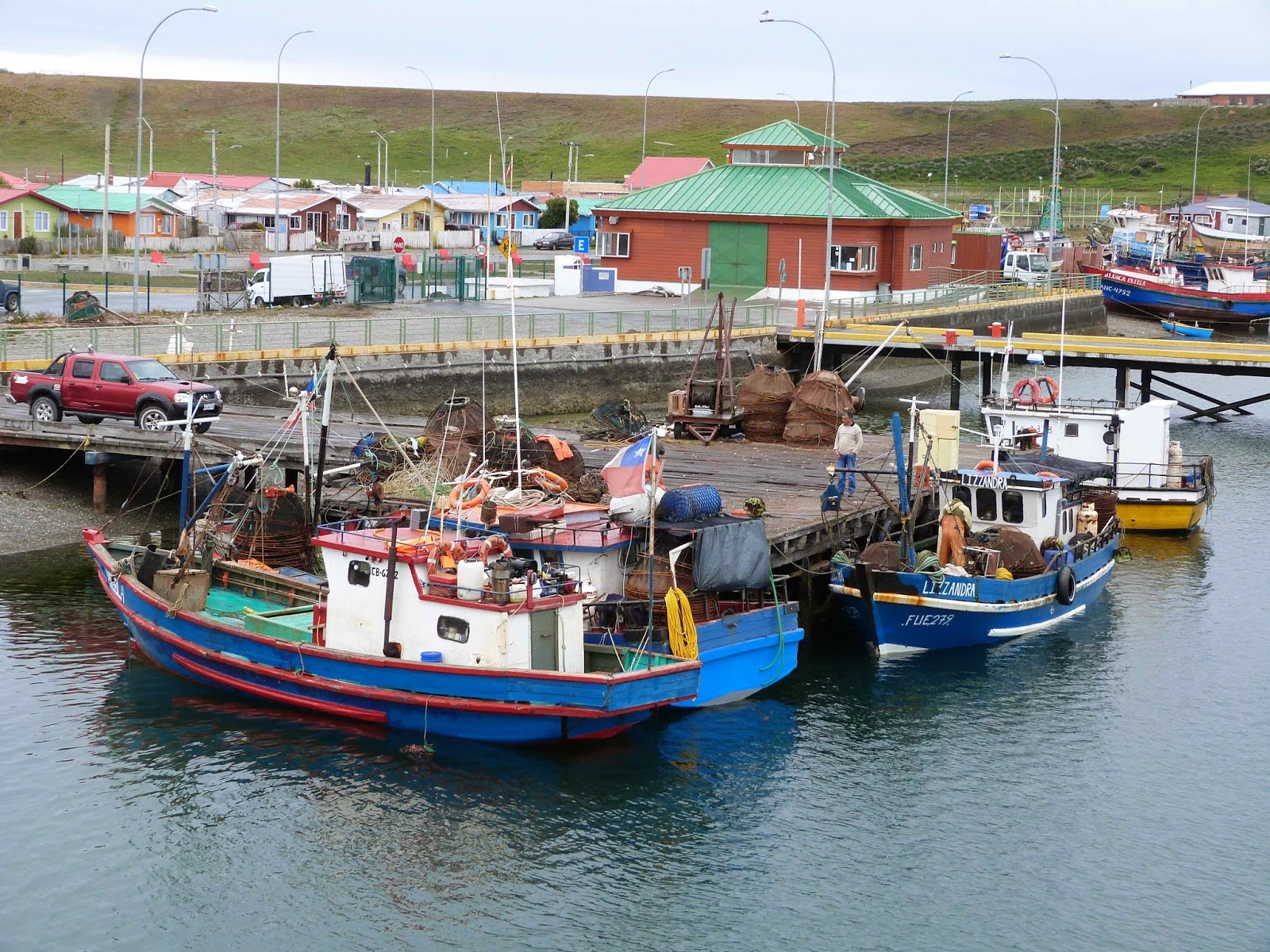 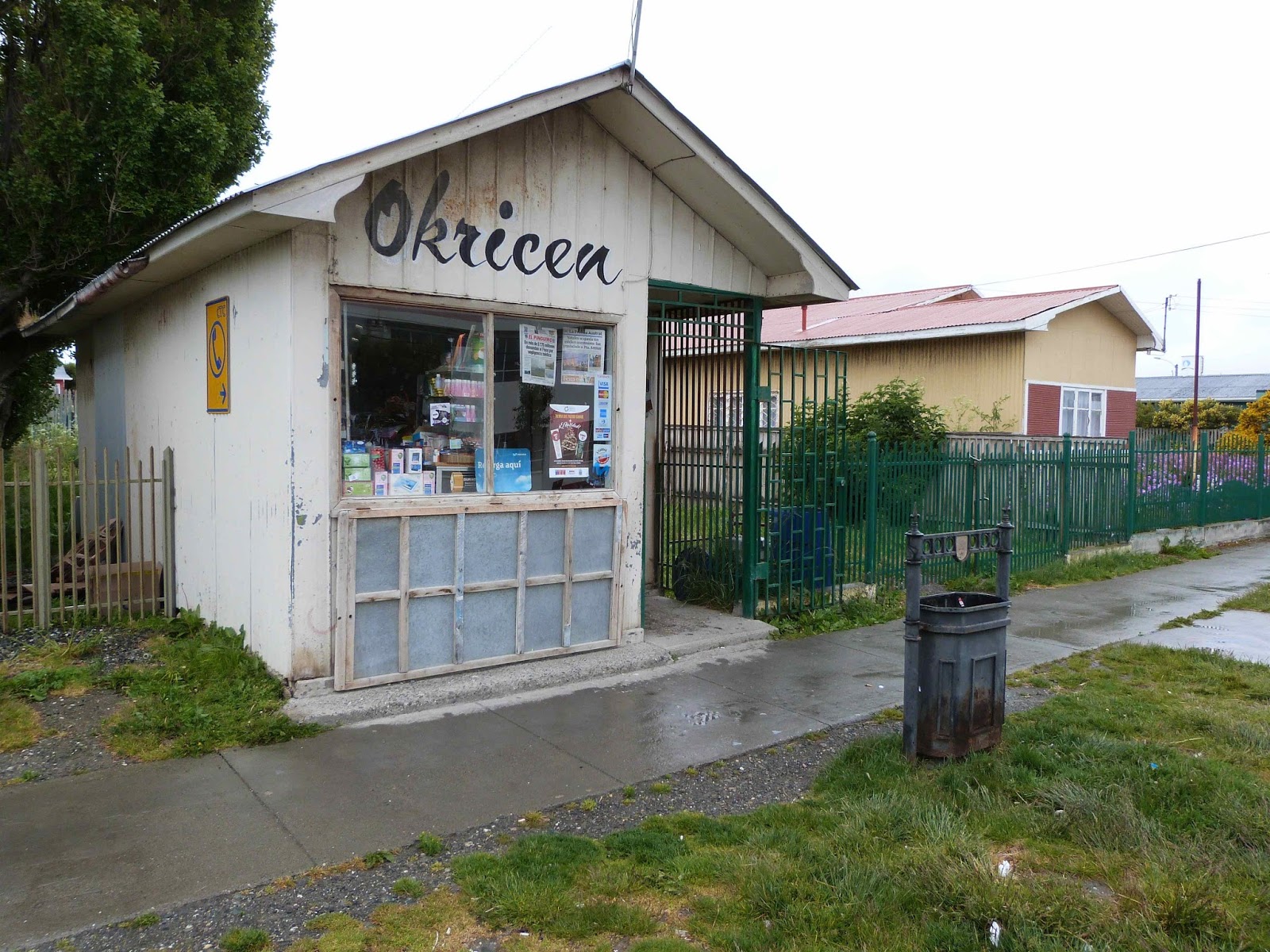 Posted by John Welsford at 4:41 AM